News from the Hamlet Of Clark Mills, NY

Clark Mills Historical Society presentation of the William Scott(Hooson) Coleman Memorial Scholarship for 2020 in the amount of $200 for each student.

The Clark Mills Historical Society annually selects graduating students who have been active in school activities, the community and will be continuing their education in order to carry on the proud heritage of Clark Mills.

In 2016, we named the scholarship in memory of Will Hooson Coleman. Will was a beloved and outstanding young man and the Hooson family has been a very central part of the history of Clark Mills.

For those of you who may not know Will Coleman, Will passed away in March of 2016 as the result of a motor vehicle accident. Will was a senior at Clinton Central Central School at the time.

Will was described as having a “compassionate heart and witty, sarcastic sense of humor” and “ an active, insightful, technical mind. Will’s passion was for computers and he had hoped to go into cyber security. He was known for “having mature patience in teaching other students”.
At their graduation, his classmates were asked to”carry his humor and empathy on one shoulder and his intellect and passion on the other”. With this, you will be ready for anything. We ask this of our three scholarship recipients today.

Our congratulations go to our first recipient: Alexandria Emery, daughter of Robert and Lindsay Emery.
Lexi has been described as a kind and caring student. She has been active in multiple sports, including soccer, basketball and lacrosse, serving as captain of her JV team.

Lexi also has been an active member of the Positivity Project, a school organization whose purpose is to support others and spread happiness and positivity to students and teachers.
Lexi will be attending SUNY Brockport in the Fall where she will continue to play lacrosse and her major, at this point, is yet undecided.

We are happy to congratulate our second recipient, Joseph Covel, son of Andrew and Jennifer Covel.
Joe is an avid baseball player and has been a very active member of the Clark Mills Volunteer Fire Department.

Joe has been described as a very respectful, polite and hardworking student. Joe plans on attending Onondaga Community College in the Fall and will major in Fire Protection Technology.
We are proud to announce our third recipient, Austin Laws, son of Timothy and Renee Werner-Laws.

Austin has been described as a good citizen and a person of good character. He has been very active in working with the school newspaper, the school yearbook, the Senior video and with writing short stories.

Austin plans on attending SUNY Purchase in the Fall where he will major in Cinema Studies.
Congratulations to all three students and best wishes for great success in your future endeavors.We are proud of you.

The Society was very pleased to have been able to provide scholarships in the amount of $200/each to three graduating seniors from Clark Mills this past year.

Congratulations to all three students who are continuing their education and carrying on the proud heritage of our community.

We would also like to thank all those who have donated to the scholarship fund enabling us to continue to help Clark Mills students for years to come.

We all know we should, but seldom do, record the history of our lives. We live and move along in life, but don’t think to save that past. Thank goodness for pictures that we have taken (remember to write on the back of them!).

This past year, we were fortunate enough to have a program featuring Society member Jim Warren and his talk on several major events in his life . Thanks to Jim’s mother, Miriam, who thought to preserve the history of an amazing event in Jim’s life.

In 1953, Jim and 12 other Boy Scouts were lucky enough to attend the 3rd Annual Boy Scout Jamboree in Santa Ana, California! This was an exciting opportunity and involved traveling cross country by train. The total cost for each scout was $350, an exorbitant amount in those days.

To raise money, the scouts held numerous paper drives and cut down Christmas trees to sell. The Utica Newspapers and Rome Sentinel, as well as the Syracuse Herald Journal featured articles about the boys working toward raising money and preparing for the trip. Miriam Warren saved it all! (Thank you Mrs. Warren)

The 13 scouts ( 12 from Clark Mills and one from Clinton who was invited to join the Clark Mills troop for the trip) were part of a group of 42 in total from The Upper Mohawk Council units. The scouts from Jim’s troop included: Jim Warren, Bruce Wadsworth(Historian for the trip, who sent back stories of their experiences that were printed in the newspapers),Saied Adour,George Mair, Irving and Mel Bonsel, Jim Holmes, Bob and Bill Randall, Ed Acee, Ed Hoyland, Charles Langdon and Pete Robinson, from Clinton. They were accompanied by Leaders Phil Mair, Norm Culbertson and Jim Williamson, who was also appointed coachmaster for the Upper Mohawk Council section.

The train left the station on July 11, 1953 with a total of 240 scouts from our council and others. They had stops in Chicago, Omaha, Yellowstone National Park, Salt Lake City to name a few. They saw the Grand Canyon , too. They arrived in Santa Ana on July 16, 1943 and left California on July 26th.

Over 50,000 scouts attended the Jamboree in 1953 and featured visits from Bob Hope, Debbie Reynolds, Jane Powell and even Vice-President Richard Nixon.

Jim said that a group of about 50 former central New York residents who had moved to California put on a picnic for the Clark Mills/ and Clinton scouts and their leaders in addition to all the Jamboree activities.

To this day, Jim has wonderful memories of his trip to the Jamboree and is lucky enough to be able to look back at all those memories with the scrapbook his mother put together.

The other experience Jim shared with the Society was of his time as a crew member aboard the USS Lake Champlain.

The USS Lake Champlain was an aircraft carrier tasked with retrieving the space capsule Freedom 7( Mercury-Redstone) after it splashed down from taking the first American into space, Astronaut Alan Shepard. Jim had just gotten out of bootcamp and was assigned to the USS Lake Champlain, but arrived 2 days after it had left port to take part in the retrieval.Unfortunately, he missed being onboard for the retrieval, but was able to see the capsule and Alan Shepard when they returned to port.

The Jim and other members of the crew were given a photo album of pictures taken by people on the ship during and after retrieval. Jim shared all this with the Society.

This was only the first exciting thing to happen to Jim on the ship.

The USS Lake Champlain was stationed in Cuba when the Cuban Missile Crisis occurred! Jim said it was a very tense time for the crew as no one knew if there would be war with the Soviets at any moment and Jim’s ship would be right at the front . Jim was at the end of his tour when the Navy had other ideas and he had to stay in for another 3 months when his ship was sent to Cuba.

Fortunately, war was averted and eventually Jim returned home was able to be discharged.

Thank you to Jim Warren for sharing these events with us! 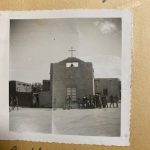 All the stories Bern Jones and other contributors wrote over a 10-year period. Clark Mills history, at its best, presented in book form.

“Moe has given me a copy of this book and I love it and you will, too! It has the first 10 years of the Recorder when Bernie Jones began the newsletter. It’s full of stories, history, recollections and pictures of Clark Mills that you may never have seen or read. So much fun to read through. Hope you will order a copy for yourself and for friends and family. Well worth it.” – Gail Williamson

Thank you to all those CMHS members who have generously donated toward the scholarship fund. Each year, the Society has given a scholarship to a deserving student and this year we have given $100 each to 2 students. We hope to continue this in the future.

There are no upcoming events at this time.